Airmail Flugzeugmodelle is the leading specialty store for diecast models in aviation and space. We have a range of more than 5’000 models. We sell directly in our beautiful store or send worldwide via our 24 hour online store.

That was not always the case. In 1997, still as a Swissair employee, Erhard Lang commissioned the production of a Swissair DC-4 handmade model to celebrate 50 years since the first transatlantic flight. This model was offered at the Swissair employee store and was an immediate success. Some pilots asked if an MD-80 would be doable. So began the still existing partnership with a small workshop in Asia and Exclusive Aeroplane Models was founded.

The first two models were followed quickly by many more. Erhard Lang took over the Airmail mail-store from Ueli Frei. His offer was based on Herpa and the very popular Snap-Fit models. After the demise of Swissair, an exhibition at the Swiss National Museum in Zurich followed. It was the first time, our models were offered to a wider public.

2002 was the proper moment to turn a favorite pasttime into a true profession. Near the airport in Glattbrugg, a suitable store was found. Exclusive Aeroplane Models was changed to Airmail Flugzeugmodelle GmbH and in May 2002, the first customers visited the store.

The local press covered the opening and printed this picture.

Airmail Flugzeugmodelle became one of the first  Herpa eXtra Shops in Switzerland.  The excellent cooperation with producers, among them Phoenix, Gemini Jets and Swiss Line, led to many models, even exclusive ones, based on Swiss heritage. The handbuilt model range was extended and the models became more detailed. Undercarriage, transparent windows, detailed cockpits are standard today.

The Glattbrugg store quickly turned out to be too small and Airmail moved to a spacious new location at the Kaiserstuhlstrasse 36 in Oberglatt. The online store grew and is based still today on the excellent engine of PhPeppershop, a Swiss development. Soon, more than 4’000 different items covered our offer which is shipped worldwide on the way to more than 5‘000 today.

The 10th anniversary was celebrated in 2012.

The handbuilt models are of highest museum standard and Airmail is proud to present them in the permanent exhibition of the Swiss Verkehrshaus in Lucerne since 2015. Airmail even sponsered an A319 as a 10th anniversary gift.

In 2014, the entire store illumination was changed to LED, bringing substantial energy savings.

In 2015, the store space was doubled with an automotive model range, opening in February.

2017 brought the 15th year of the company. The automotive models were not a smashing sucess and more space for the ever increasing aircraft model range was needed. We now have space flight, helicopters, an extended range of military models and many 1:200 models in beautiful displays. In the same year, as Erhard and Susi Lang were slowly approaching age, the search to find a succession for Airmail was initiated and successful: 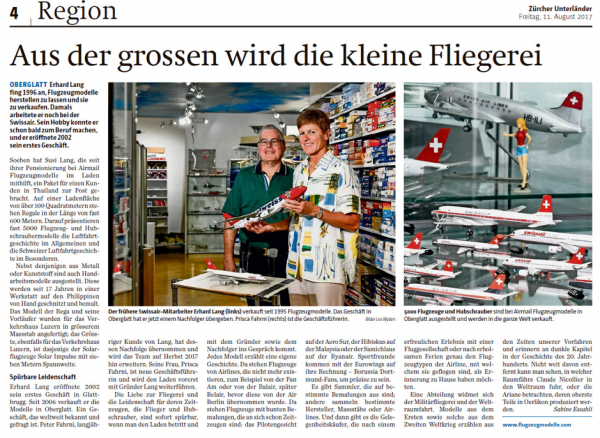 Prisca and Peter Fahrni took over Airmail Flugzeugmodelle GmbH with the intent, the enthusiasm and new ideas to continue building upon a great success story by Erhard and a very loyal customer base in Switzerland and beyond. The Logo was adapted a bit: From the Learjet to a Boeing 777. 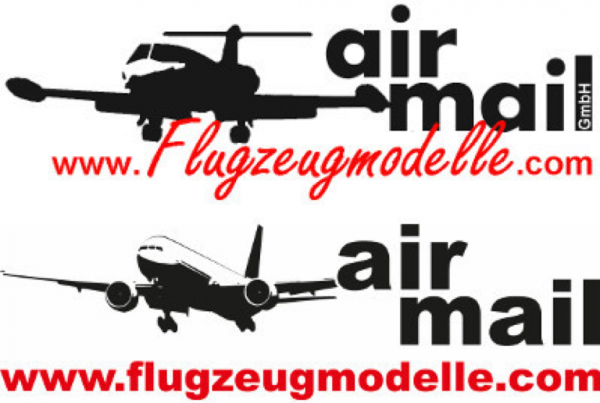 We welcome you to be part of the ongoing history of Airmail Flugzeugmodelle.com and always welcome you to a personal visit in Oberglatt or to our online store.